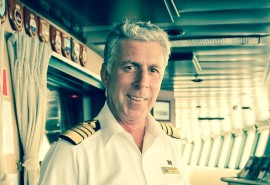 "...experience it and then say if from your own heart..."

Captain Kevin Oprey comes from a long sea-faring background where his father, grandfather, and great grandfather were all at sea. From a very early age, Captain Oprey knew the sea was his destiny.

As Captain of the marveled Queen Mary 2 under Cunard, Kevin Oprey is in ultimate command of the vessel. As a Captain, he is responsible for a safe and efficient operation, including cargo operations, navigation, crew management, and ensuring that the vessel complies with local and international laws, as well as company and flag state policies.

Additional to this there are the people on board, including officers and crew who are under the captain’s authority and are his ultimate responsibility.

“There are certainly a different set of challenges working at sea–from running a virtual city at sea to the conditions outside an office window”.