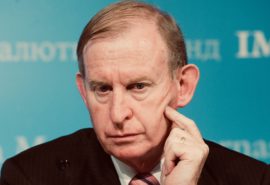 "Be curious... asking the right questions of your board is paramount."

David Murray AO joined the Commonwealth Bank in 1966, was appointed Chief Executive Officer in June 1992, and retired from this position in 2005, giving an outstanding 39 years of service.

David has extraordinary experience in the finance and banking sector and considerable knowledge of the financial markets. He has strong corporate governance credentials having guided CBA through a number of major changes, including privatization in 1996. During his 13 years as Chief Executive, The Commonwealth Bank transformed from a partly privatised bank with a market capitalisation of $6 billion in 1992 to a $49 billion integrated financial services company, generating in the process total shareholder returns (including gross dividend reinvestment) at a compound annual growth rate of over 24 per cent, one of the highest total returns of any major bank in Australia.