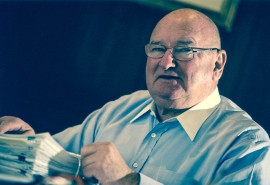 "Leadership education is in life… "

Lindsay Fox was born in Sydney in 1937; attending a school for academically gifted boys until quitting at the age of 16 to become a truck driver like his father. He was described as a ‘brilliant’ student, just one that no one knew what to teach. At the ripe age of 19, Lindsay convinced a trucking yard to sell him his first truck.

Today, Linfox is one of the largest privately owned Australian-based transport and warehousing groups with operations in 11 countries.

The Linfox Group employs more than 30,000 people, operates warehousing the size of 250 Melbourne Cricket Ground’s, a fleet of more than 6,000 vehicles and carries out distribution operations for major global companies.

Lindsay has extensive involvement in Australian and International circles and apart from his business interests is well recognised and active in community based sport and charity work.