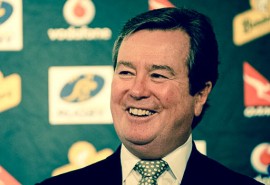 "A circuit breaker will shift culture... make the tough decisions early on."

Between 1987 and 1995, John was the Managing Director of the State Bank of New South Wales. During this time, John introduced innovative home lending that changed the Australian market and pushed the successful sale of the Bank to get its ownership into the private sector. His legacy saw First State Funds Management within the State Bank become one of the best high performing fund managers; subsequently now still with the Commonwealth Bank Group as Colonial First State.

Appointed CEO of Australian Rugby Union (ARU) in 1994, over eight years, John transformed the sport in Australia from one run by amateurs to one with genuine professional management. In doing so he established practices that other top Rugby nations sought to emulate, establishing Australia as an international Rugby power and for much of his tenure, the Wallabies were clearly the best team in the world. The ARU transformed from being financially bereft to achieving strong commercial revenue and assets.