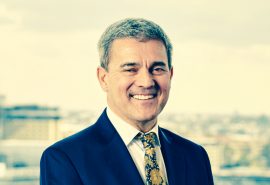 "The challenge I see for leaders is to encourage people to take advantage of the opportunities they now have to learn more, take on more accountability, make more decisions and get involved in things which they may not have had the chance to before. Give people “the right to fix”."

Vaughn retired as CEO of ING Direct (Australia) in 2016, which he launched and helped grow to become Australia’s sixth largest retail bank over the last two decades. Vaughn also has extensive banking experience across Asia, where he led ING Group’s commercial and retail banking operations, and served as CEO of ING Retail Banking Asia.

Vaughn arrived in Australia to start the business in 1995, and was the CEO until January 2016. He was appointed as CEO and MD of ING Vysya Bank, a listed company on the Indian Stock Exchange, to turn around a loss making business. Following the successful transformation of ING Vysya, he was appointed Regional CEO of ING Bank Asia, covering 14 countries and 4 joint listed shareholdings in the region.

During his tenure at ING Direct, Vaughn launched Australia’s first branchless bank model. Beyond his track record for driving significant innovation in banking, Vaughn became well know for his pro-consumer stance and his commitment to delivering exceptional customer experience and was named Australian Financial Services Executive of the Year 2016 at the AB&F Awards.

Vaughn continues as an advisor to ING Bank, and has recently joined the board of Ratesetter Australia. He is a member of the Advisory Council of the Australian Digital Commerce Associate, and is an advisor to Humanity in Business. Vaughn speaks and writes extensively on Leadership, Culture, Customer Centricity, Digital Commerce and business in Asia.